Alternative services run between Birmingham and Chelmsley Wood (Circle), namely services 14, 55 & 94, however service 97 is the most direct route with a journey time of approximately 35–40 minutes.

Service 97 was introduced by WMPTE in November 1976. Prior to this, services along Bordesley Green/Meadway were provided by ex-Birmingham City Transport service 53 which ran as far as Tile Cross Road (junction with Shirestone Road) approximately every 12 minutes Monday to Saturday daytimes (every 20 minutes evenings and Sundays) and service 54 which ran to similar frequencies as far as Stechford (Stuarts Road). In Bordesley, service 53 ran via Fazeley Street and Garrison Lane while service 54 ran via Digbeth and Catell Road. Services to Chelmsley Wood were introduced by Midland Red in 1967 and 1968 as the area developed and as a variant on the operating agreement between Birmingham City Transport and Midland Red ran non-stop from the city boundary at Tile Cross to Birmingham City Centre (except for setting down inbound and picking up outbound). The services consisted of service 193 via Bosworth Drive and past the southern edge of Chelmsley Circle then Greenlands Road to Helmswood Drive junction, and service 169 also via Bosworth Drive and past Chelmsley Circle then Moorend Avenue and Berwicks Lane to Helmswood Drive junction. Together these services provided a 10 minute frequency Monday to Saturday daytimes meaning that, in a reversal of the usual situation, the stop just outside the city boundary had a more frequent service than the stop just within the boundary (the terminus of service 53). Additionally, service 163 provided a service that ran on to Cooks Lane then Chelmsley Road and past the northern edge of Chelmsley Circle on to the Chelmsley Road / Helmswood Drive junction. This service also ran every 20 minutes Monday to Saturday daytimes and together with the 169/193 provided a 10 minute evening and 20 minute Sunday service to either side of Chelmsley Circle. The fourth service via Bordesley Green / Meadway was the half-hourly service 195 to Chelmsley Wood North (Aaron Way) via Forth Drive introduced in 1969. Yorkminster Drive was first served from 1969 by service 171 which ran via Yardley, Garretts Green Lane and Marston Green. From 1971, this then linked up with Coleshill via Water Orton service 161 to provide a circular service, 161 inbounds via Yardley, 171 outbound via Yardley.

Once WMPTE took over the Midland Red service within the West Midlands metropolitan area at the end of 1973, the Chelmsley Wood / Meadway corridor was one of the more obvious candidates for rationalisation although surprisingly this still took nearly 3 years to happen. Service 97 ran as service 53 then via Bosworth Drive, left on Moorend Avenue and Chelmsley Road to Coleshill Heath Drive whilst service 98 ran via Digbeth, also via Whittington Oval and Lea Hall Road, then on to Cooks Lane, Chelmsley Road, Chelmsley Circle, Greenlands Road, right on Helmswood Drive, left on Berwick Lane, then Coleshill Road and Station Road to Marston Green Station. Service 97 ran every 6 minutes Monday to Saturday daytimes but with every other service terminating at Shirestone Road, and service 98 ran every 12 minutes. Both services ran every 15 minutes evenings and Sundays (with all 97 journeys running through to the end of Chelmsley Road) to give a combined 7/8 minute frequency during these periods. Service 195 was also renumbered to service 99 additionally running via Whittington Oval and Lea Hall Road (and later extended slightly to terminate at the Auckland Drive / Lanchester Way junction) whilst becoming an all-stop service. The main part of Berwicks Lane was now served by a Solihull to Chelmsley Wood via Sheldon service (a situation which continues to this day). By the end of the decade most Shirestone Road variants were instead terminating at Chelmsley Circle, then in 1982 ,these services were extended to run the length of Yorkminster Drive (including evenings and Sundays) and renamed 97A. 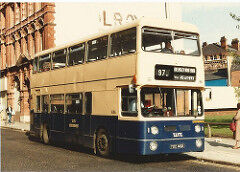 In 1986 West Midlands Travel discontinued service 98. Service 97 was diverted to serve Greenlands Road and in turn service 161/171 diverted off Yorkminster Drive to serve the eastern half of Chelmsley Road (the western half being served by a re-routing of service 94). Service 97A was also diverted to serve Digbeth and renumbered to service 96, whilst service 99 became a feeder service by terminating at Bordesley Green (Belchers Lane) inbound. Services 96 and 97 together now ran (alternate) every 5 minutes and every 15 minutes evenings and Sundays. In 1989 service 99 once again served Birmingham but now from Whittington Oval via Yardley, Yardley Green Road and Small Heath (Glovers Road), whilst service 161/171 via Chelmsley Wood was renumbered as service 59. This was also the year that minibuses came to Chelmsley Wood in the form of service H (later 98), a short one way loop to and from Chelmsley Circle via Dunster Road and Berwicks Lane, and service E (later 670) serving Elmdon Road via Woodclose Road and part of Chapelhouse Road (a route last served by service 91 in 2020). In 1992 minibus service 98 was withdrawn and service 59 instead diverted via Dunster Road (last served by service 70 in 2017). The eastern half of Chelmsley Road remained served by Chelmsley Wood – Airport service 966. Later in the decade service, 670 was renumbered to 676 and extended first to Sheldon and Acocks Green, then to International Station. In 2006/07 service 96 was diverted to also run via Garrison Lane rather than Digbeth and renumbered to service 97A. Also, service 99 was discontinued (Lea Hall Road instead served by buses via Yardley). In March 2013, Greenlands Road and Yorkminster Drive services were combined into a loop service (passing through Chelmsley Wood round the loop to terminate back in Chelmsley Wood). At the same time, two buses an hour were extended from Greenlands Road to Birmingham Airport via Coleshill Heath Road also running as service 97 distinguishable only by their destination display. However in July 2013, to avoid confusion, these services adopted the number 97A. The 97A variants were sponsored by Birmingham Airport and included an hourly night service. In April 2015 the loop was discontinued. All 97 journeys once again terminating at Chelmsley Road/Helmswood Drive whilst Yorkminster Drive is now served by service 14 to Birmingham via Marston Green and Alum Rock. From May 2016 a non-weekday-daytime extension of the 97A via the M42 junction 6 roundabouts to Resorts World within the NEC complex was introduced. However, in June 2017 the Airport's support was withdrawn meaning the 97A variants, including the night service, was discontinued.

A number of alternative operators have provided competition on the route since the early 1990s, most significantly United Group, People's Express, and Diamond. This competition led to a temporary skewing of the balanced (10 minutes each daytime) frequency of the 97 and 96 services during the early/mid 1990s in favour of service 97 (this being the focus of most of the competition) as well as some counter faux competition by West Midlands Travel subsidiary Travel Your Bus in the late 1990s / early 2000s. The most recent competitor Central Connect withdrew their service 97 operations in 2011.