Midland Red was a bus company which operated in the The Midlands from 1905 to 1981. It was the trading name used by the Birmingham and Midland Motor Omnibus Company (BMMO), which was renamed Midland Red Omnibus Company in 1974. The company was one of the largest English bus companies, operating over a large area between Gloucester in the south and Derby in the north, and from Northampton to the Welsh border. The company also manufactured buses.

In 1899 the British Electric Traction company acquired the assets of the Birmingham General Omnibus Company, which had been formed 3 years earlier to acquire a number of horse bus operations in Birmingham. When BET ordered new buses for Birmingham the next year, they were painted red to make them stand out. In 1902 BET acquired the City of Birmingham Tramways Company Ltd, which operated horse buses as well as trams.[1]

The Birmingham and Midland Motor Omnibus Company was formed by local businessmen in November 1904 to operate motor bus services in Birmingham. When the directors failed to attract sufficient investors, BET acquired control of the new company, and in 1905 transferred its local horse bus operations to it. The company also acquired a motor bus company which had started in 1903. BMMO started operations under its own name in July 1905. However, the company experienced problems with its motor buses, and in 1907 reverted all its motor bus services to horse bus operation.[1]

In 1912 the company purchased some Tilling-Stevens petrol-electric buses. Further motor buses followed, and by June 1913 only 17 horse buses remained. The company adopted for its motor buses the red livery used by Birmingham General, and the buses carried the fleetname "Midland".[1] They soon acquired the nickname "Midland Red".

By 1912 the Birmingham Corporation Tramways had used its statutory powers to acquire the city's tramways which it did not already own, and wanted to consolidate the operation of bus and tram operations in the city. Since it was going to be difficult for BMMO to expand in the city, it reached agreement with the corporation to operate services from outside Birmingham into the city and transfer its services within the city to the corporation. The company then expanded outside Birmingham, and moved its headquarters to Bearwood in Smethwick.[1]

During the First World War the company took over BET operations in Worcester and elsewhere, and after the war opened depots at Walsall, Coventry, Wolverhampton, Hereford, Stafford, Banbury, Bromsgrove, Shrewsbury, Nuneaton, Leamington and Leicester. During the 1920s the tramways owned by BET in the Black Country were gradually replaced by Midland Red buses.[1]

In 1930 the Great Western Railway and the London Midland and Scottish Railway together acquired 50% of the company. The few GWR bus services in the area were transferred to Midland Red.[1]

Midland Red started express coach services in 1921 with routes to Weston-super-Mare and Llandudno.[1] Coach services expanded, and in 1934 Midland Red became a founder member of the Associated Motorways consortium.

When the railways were nationalised in 1947, Midland Red became 50% state-owned. In 1968 BET sold its UK bus interests to the government, and in January 1969 the company became a subsidiary of the National Bus Company (NBC). The livery was later changed from a deep red to the NBC corporate poppy red.

In 1973 the garages (with the exception of Digbeth Coach Station, Bearwood and Cradley Heath) and routes within the West Midlands county were transferred to the control of the West Midlands Passenger Transport Authority, leaving Midland Red with country and local routes mainly in Derbyshire, Herefordshire, Leicestershire, Nottinghamshire, Shropshire, Staffordshire, Warwickshire and Worcestershire; and express services.

From 1977 onwards, after extensive passenger research the company was rebranded into local area names under the Viable Network Project (VNP), something that was soon renamed as the Market Analysis Project (MAP) and widely adopted throughout NBC and elsewhere in the bus industry. Each new network spawned a localised brand, as follows:

In preparation for privatisation of the NBC, Midland Red was split into six new companies in 1981:

Midland Red West was sold on 22 December 1986 to a management team led by managing director Ken Mills, who also took over Midland Red Coaches on that date.

Midland Red South was sold on 10 December 1987 to Western Travel Limited, who also owned the Cheltenham and Gloucester Omnibus Company.

Midland Fox Limited, formerly Midland Red East, was sold on 18 August 1987 to its management. The operations of the Swadlincote depot were purchased by Stevenson's of Uttoxeter.

Midland Red North was sold on 27 January 1988 to Drawlane Limited.

In 1912 the company bought its first Tilling-Stevens petrol-electric vehicles. Tilling-Stevens became the main supplier of bus chassis to the company which, under its Chief Engineer L.G. Wyndham Shire, adapted and developed the designs to its own requirements, finally designing a vehicle it intended to construct itself.

Between 1923 and 1969, the BMMO built most of the buses it operated: up to 1940 these were called 'SOS', and some models were supplied to other bus companies associated within the British Electric Traction (BET) group. After 1940, the vehicles were identified by the company's initials, BMMO, and supplied solely for the BMMO company's own use. Codes later used for buses were FEDD (Front Entrance Double Decker), REDD (Rear Entrance Double Decker), Coaches were initially classified "ONC", but later used a prefix of "C" - or "CM" for Motorway coaches. Single Decker models were numbered from S1 through S23, Double Decker models D1 through D10. The D10 was, in some opinions, the pinnacle of BMMO bus design - a double decker with front entrance/rear exit and an underfloor engine. GD6 and LD8 were exceptions to the normal designation system - these codes referred to batches of respectively Guy and Leyland vehicles acquired when the manufacturing operation could not meet the heavy demand. Individual buses were numbered from (around) 2000 to 5900 - registrations (usually) incorporated the last three numbers of the serial, and a letter prefix of three letters ending in "HA" ( a Smethwick origin registration mark). This relationship did not apply to the limited number of buses gained as a result of acquisition of other operators. Bus manufacture, overhaul and accident repair was carried out at Carlyle Road Works, adjacent to the reservoir in Edgbaston, Birmingham. Nearby to the works was BMMO's head office, in Vernon Road, Edgbaston. 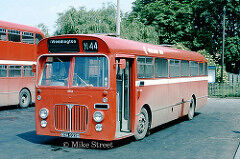 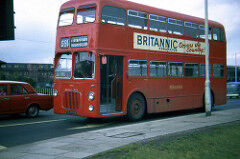