The Metropolitan line is part of the London Underground. It is coloured in Transport for London's (TfL) Corporate Magenta[1] on the Tube map and in other branding. It was the first underground railway (or subway) in the world, opening on 10 January 1863 (however, parts of that initial section are no longer served by the Metropolitan line, but by the Hammersmith & City, District and Circle lines). The main line runs from Aldgate in the City of London to Amersham, with branch lines to Uxbridge, Watford and Chesham. For the initial section of the line the rails are underground for much of the way; beyond Baker Street, at Finchley Road the line runs in the open. Out of the 34 stations served, only 9 are underground. It is the oldest line and initially covered the bulk of the Underground system. Today it is the ninth busiest line on the network.[2]

The four-track layout utilized between Wembley Park and Moor Park allows for the running of express or "fast" services to the outer suburbs. Baker Street is the terminus for many trains, with others continuing into the city to Aldgate.

It is the fastest line on the London Underground network. Before the late 1990s/early 2000s, the fast line north of Harrow-on-the-Hill was 70mph. However, the Metropolitan stock has now been limited to 50mph but the stock is still one of the fastest. Line speeds have dropped accordingly with the majority of the line north of Finchley Road limited to 50mph, and where National Rail services run on the line it is 60mph.

The Metropolitan line and the Central line are the only two Underground routes to have stations outside of the boundaries of Greater London and the M25 orbital motorway.

The origins of the Metropolitan line lie with the incorporation, in 1853, of the North Metropolitan Railway, the original name of the Metropolitan Railway, which railway had been empowered to build a line from the Great Western Railway at Paddington to Farringdon, with a connection to the Great Northern Railway at King's Cross.[3] Work on the railway had begun in February 1860 using the "cut-and-cover" method of construction. This caused massive traffic disruption in north London; during the work the Fleet Sewer burst into the diggings, flooding the partly-built tunnel.[4][5] The first section was opened from near Paddington to Farringdon Street (now Farringdon station) in January 1863.[6] Later in 1863, it was suggested that all the main-line termini of London should be linked by underground railway. Parliament recommended that the best way of doing this was to form an "inner circuit", part of which would be the existing Metropolitan Railway; another section would be built by a new company (the Metropolitan District Railway), whilst the Metropolitan would build the connecting lines.

Between its opening and the 1930s the railway was expanded until its total mileage exceeded 90, most of it progressively electrified from 1905. In 1933 the Metropolitan Railway was nationalised by the London Passenger Transport Board, becoming the Metropolitan line of the London Underground. The line was successively rationalised during this period. The section north-west of Aylesbury was closed in 1936, though services did return to Quainton Road again between 1943 and 1948. In the same year a service extension from Whitechapel to Barking was implemented along the tracks of the District line. In 1939 the Stanmore extension was taken over by the Bakerloo line. The Stanmore extension was subsequently transferred to the Jubilee line when that line first opened in 1979.

Steam-hauled passenger trains ran north of Rickmansworth until 1961 and maintenance trains until 1972. A major modernisation of the that arm of the network line took place by 1960. The service was totally electrified to Amersham and Chesham, while the service beyond Amersham was withdrawn in September 1961, along with the steam passenger service. The line north of Harrow-on-the-Hill was quadrupled to Northwood Hills by 1961 and Croxleyhall Junction (north of Moor Park) by 1962. Prior to that local and semi-fast services from Aylesbury to Harrow had shared the double track with main line expresses of the former Great Central route.

In 1998, the Metropolitan line was partly privatised in a controversial public–private partnership. It is now part of the "Sub-Surface Railways" group, managed along with the Circle, Hammersmith & City and District lines by the Metronet consortium.

The current rolling stock in use on the Metropolitan line is the sub-surface gauge A Stock built by Cravens in Sheffield, which were shared with the East London Line until 2007. While it ran in service with unpainted aluminium bodywork for many years, since refurbishment the stock has received the now standard white and blue Underground livery, with red ends. The first train of S Stock is now in service. A Stock Metropolitan line services are usually formed of two four-car units coupled together for a total of eight cars, although the Chesham shuttle service is served by four-car trains, as was the East London Line when it was an Underground route.

The A Stock trains were built in the early 1960s and are now the oldest trains operating on the London Underground. They replaced a wide variety of older rolling stock, including trains with hinged doors and compartments (T Stock electric multiple units for Watford services and locomotive-hauled carriages for Aylesbury services), as well as London Underground P stock (built in 1937) and F Stock (built in 1920) used on Uxbridge services. 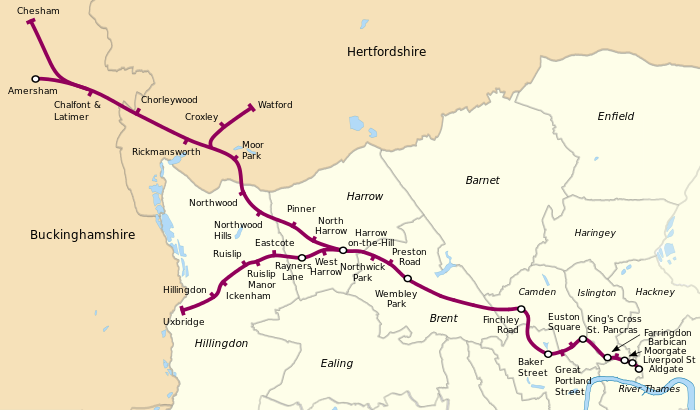 The Metropolitan line is served by one depot at Neasden.[7]

The Metropolitan line significantly differs from other London Underground lines, having more of a suburban mainline feel. There are many reasons for this, some of which are listed below:

The Metropolitan line is unlike other London Underground lines in that it operates express or "fast" services and is one of two lines to have an express section that is serviced by another route, the other being the Piccadilly line. Piccadilly line trains run fast between Hammersmith and Acton Town (with only an intermediate stop at Turnham Green at certain times of the day), but the intermediate stations are served by the District line, and so all Piccadilly line trains stop at all regular Piccadilly line stations on their route, in the same way that the Metropolitan line bypasses Jubilee line stations between Finchley Road and Wembley Park. Fast services, usually to Amersham, call at Baker Street, Finchley Road, Wembley Park (off-peak hours only), Harrow-on-the-Hill, Moor Park and then all stations after. There are also semi-fast services, usually in the peak, which use the fast stopping pattern as far as Harrow-on-the-Hill, but then run all stations, usually to Watford.

The current off-peak service pattern is as follows:

London Underground have proposed reducing the service to Amersham from 4tph to 2tph, while Chesham will be served by 2tph to London .[13]

During peak hours the services vary much more. Trains can run through from Aldgate to any destination, and each terminus gets a mixture of fast, semi-fast and slow services. Semi-fast services usually do not call at Wembley Park. Through trains also run between Chesham and London. There are also a few early-morning/late-evening trains from Rickmansworth to Watford.

The Metropolitan line is the only line not to have any interchange with the District line as much of its original route has been reformed into the Circle and Hammersmith & City lines.

Steam on the Met[]

In 1989, to celebrate the 100th anniversary of the opening of the Metropolitan to Chesham, the first Steam on the Met event took place, with London Underground running two weekends of steam specials between Chesham and Watford.[14]

The event was a great success so in 1990, the London Underground decided to run steam between Harrow and Amersham. In 1992, to celebrate 100 years of the Met at Amersham, the event was extended to 5 days at the end of May. In 1995, it was decided to run trains between Amersham and Watford.[15]

Engines used in the event include but not limited to BR standard class 4 tank, BR standard class 5, and GWR Pannier tanks. There were also various other rolling stock used as static displays at Rickmansworth sidings. Initially, London Underground hired coaching stock from British Rail for the event, but found out that it was actually cheaper to buy coaches instead, thus, LU acquired numerous coaches from BR. The steam trains ran in between normal timetabled Metropolitan and Mainline services.

Due to the imminent part privatisation of LUL and the condition of the coaching stock, the last Steam excursion took place in 2000. However, since 2007, special trains run on the Met using the electric Sarah Siddons and diesel Class 20 locomotives.[16]

Transport for London and Hertfordshire County Council are developing plans to divert the Watford Branch from the current Watford tube station and reroute it over the disused Croxley Green branch line to Watford Junction.

It was envisaged in 2005 that the link would be operational by 2010,[17] but difficulties in securing funding caused the project to be postponed.

Watford station is located in a housing estate by Cassiobury Park, rather than serving the centre of Watford. Should the project go ahead, the station would close, to be replaced by a new station at Ascot Road and a refurbished and reopened Watford West.[18] There have also been proposals to also re-extend the Bakerloo Line from Harrow & Wealdstone to Watford Junction coinciding with the moving of the Watford branch of the Metropolitan line to Watford Junction, which would see the withdrawal of the current London Overground service on the Watford DC Line.[19][20]

As part of a wider overhaul of the sub-surface lines, there were also plans to run Metropolitan line trains from Uxbridge through Aldgate East to Barking. These services would replace the Hammersmith & City line, which would be curtailed or withdrawn as part of the Circle line re-organisation. However, this would only be possible after the delivery of the S Stock, which is now being rolled out,[21] as there are a number of gauge infringements which mean that the Metropolitan line's A stock trains are banned east of Aldgate.[22][23] The extension of the Metropolitan line east towards Barking has now been withdrawn by TfL planners as of August 2010.

In May 2008 a TfL review of the Metropolitan line saw a proposal to change the train times for Amersham station and Chesham tube station. The peak hour trains 0700 to 0800 and 1800 to 1900 would not be affected.

Only two trains each peak period run direct from Aldgate to Chesham or vice-versa. The recast of services would see this increase to two trains per hour all day. With a full S Stock fleet, there will be no trains left to fit the bay platform at Chalfont & Latimer, necessitating the introduction of full through-service.

Because of the extra trains going to Chesham there would only be two trains per hour to go to Amersham instead of the four trains per hour now. The Chiltern Railways services, having two trains an hour (except on Sunday when they only run one train an hour), would not be affected.