24 Hour Service
plus N109 between Croydon and Marble Arch

London Buses route 159 is a Transport for London contracted bus route in London, United Kingdom. The service is currently contracted to Abellio London.

In 1964, route was extended from Thornton Heath to Croydon Garage (Saturday am) and Brixton (BN) gained the Saturday service.

Brixton's (BN) allocation was withdrawn in 1969.

Routemasters replaced the RT's in 1970.

In 1990, Brixton's Sunday allocation was reintroduced and withdrawn between Streatham & Thornton Heath, replaced by withdrawn route 290.

Withdrawn between Baker Street and West Hampstead and replaced by new route 139 and Sunday service was withdrawn in 1992.

In 1999, diverted full length of Oxford Circus to Marble Arch instead of via Gloucester Place to Baker Street Station, diverted at Westminster via Westminster Bridge instead of Lambeth Bridge to replace the withdrawn section of route 109 and the Sunday service was also reintroduced and Thornton Heath (TH) gained the Sunday only allocation, using Metrobuses and DLA's.

On December 2005, Route 159 was the last route to be converted from Routemasters to low-floor bus, by using brand new Volvo B7TL 10m / Alexander ALX400 (VLA's) and Brixton (BN) gained the whole service.

Route N159 runs the night service for route 159 between Marble Arch and Streatham Station and then continues to Croydon and New Addington via route 109 and route 466. 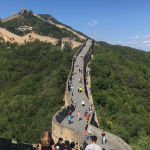