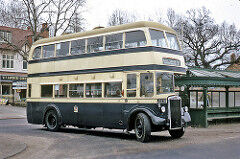 In 1899 Birmingham Corporation decided to follow the example of municipalities elsewhere and operate its own tramways upon expiry of the various leases granted by the Corporation to private companies.

Powers to operate and electrify its own tramways were sought, resulting in the Birmingham Corporation Act 1903.

The Corporation possessed limited powers to operate its own motorbuses under the Birmingham Corporation Act, 1903, but these powers restricted the running of such vehicles to periods during the construction, alteration or repair of tramways, or in prolongation of any tramway route, the extension of which might be contemplated. By November 1913 two motor omnibus routes were running from Selly Oak (tram terminus), one to Rednal and the other, overlapping the first route between Selly Oak and Longbridge but then striking west to Rubery. Ten Daimler 40 h.p. buses with 34-seat bodies, numbered 1-10, were purchased to operate the services and were thus the first buses to carry the Corporation blue and cream livery.

The country was soon plunged into the Great War (1914-1918), and many operators were faced with the commandeering of their motorbus chassis. Services had to be pruned as a result and, interestingly, because BCT was unable to provide any "extras", Austins at Longbridge ran some 15-20 of their own buses which were the origin of the various independent services to works that are still a feature today. However more problems were on the way; in mid-1917 services were again drastically cut due to the acute shortage of petrol.

By February 1926 the tramway route from Selly Oak had been extended to both Rednal and Rubery, so the Corporation discontinued these two motor bus routes.

In 1937 Birmingham City Transport was created out of Birmingham Corporation Tramways. The name reflected the fact that there was now a mixture of trams, trolleybuses and motorbuses operated in Birmingham.

Between 1947 and 1954, Birmingham City Transport purchased 1,748 new buses to replace its entire fleet of trams and trolleybuses, along with utility buses (built to inferior standards during the Second World War), and all except 40 or so of its pre-War fleet. The last tram ran on 4 July 1953.

From the earliest days of motorbus operation the Corporation adhered to an agreement with the Midland Red bus company that routes would not operate beyond the city boundary. In return, Midland Red services from outside of the city would charge fares above that levied on the Corporation buses to discourage 'local' passengers. The only exceptions were jointly operated routes to Soho, Bearwood, Oldbury / Dudley and West Bromwich / Wednesbury (the latter with West Bromwich Corporation).

Birmingham City Transport survived until 1969 when it became incorporated in the West Midlands Passenger Transport Executive.