Arriva plc is a multinational public transport company owned by Deutsche Bahn and headquartered in Sunderland, United Kingdom. It has bus 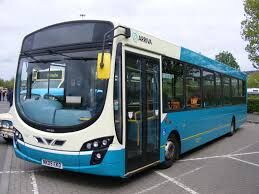 It is the third largest of the 'big five' bus operators in the UK, after First Group and Stagecoach, and ahead of Go-Ahead and National Express.

The company was founded by T.S. Cowie in Sunderland in 1938 as a second hand motorcycle dealer trading as T.Cowie Limited.[1] In 1948 the business was re-launched by Tom Cowie, the founder's son, still selling motorcycles.[2] It moved into motor retailing in the 1960s.[1] In 1972 it formed Cowie Contract Hire which became the largest contract hire business in the United Kingdom.[2] In 1980 it acquired the Grey Green Coach and Bus Company in London.[1] In 1984 it acquired the Hanger Group and, with it, Interleasing, a large vehicle leasing business.[2] Then in 1996 it bought British Bus Group, which had acquired a number of privatised bus companies.[1]

In 1997 it changed its name to Arriva plc.[1] In that year it also bought Unibus in Denmark, its first venture outside the UK.[1] Around the year 2000 it also started to participate in the opportunities created by rail privatisation.[1] In 2003 it sold its motor retailing business[3] and in 2006 it sold its vehicle rental business to Northgate for £129m.[4]

In 2010 it was reported that the German Deutsche Bahn and French SNCF companies were considering submitting bids for the business;[5][6] Keolis (SNCF subsidiary) and Arriva entered discussions regarding a merger.,[7][8] on 19 April 2010 it was announced that Deutsche Bahn was to make an offer for Arriva at 775pence per share (£1.5 billion);[9][10] the merger was approved by the European Commission in August 2010, subject to DB divesting some Arriva services in Germany. The merger became effective on 27 August 2010.[11]

Arriva's bus network in the UK originates from its acquisition of Grey-Green Buses in 1980 and the British Bus Group in 1996.[1] It has the

Arriva Trains Wales/Trenau Arriva Cymru operates the majority of passenger rail service in Wales and the Welsh Marches. It gained the

franchise in 2003 and it is due to run for 15 years, subject to Welsh Assembly Government reviews every five years.[12] Arriva also operates CrossCountry which provides rail services on long distance cross country routes in England and Scotland from 11 November 2007 to April 2016. The concession was previously operated by Virgin CrossCountry.[13]

In the main, for bus and rail operations, Arriva uses a uniform corporate livery. The livery features an aquamarine base colour with a Cotswold Stone coloured semicircle on the upper front section, outlined by a white stripe. A thin yellow stripe runs around the base of the vehicle, and the same yellow is used for any lettering on the vehicle, although some vehicles have lettering in the same light green as their logo.

Various route branding schemes see the liberal application of basic colours and wording to some routes, usually through the application of vinyl stickers.

Initially to comply with Transport for London's contract requirements, Arriva London adapted its livery by using red as the base colour, with extra red at the front to form "horns" instead of a full circle. Latterly, London vehicles have been painted all-over red, with almost no trace of the Arriva corporate livery.

Exceptions to standard livery include:

In late 2009, a decision was finally made in the United Kingdom to make the previously "interurban" livery the standard livery for buses there, after a long period of confusion, with both repaints and new deliveries going into both liveries. A repaint programme has now started for all buses in the fleet. Continental European buses continue to carry the previous colour scheme.

David Martin has been the chief executive officer of Arriva since 19 April 2006.